A biochemistry professor on the campus of University of California, San Francisco, needed to create an automated solution for monitoring conditions in the university’s Cryonics lab. The lab is home to two high-value Krios cryo-electron microscopes which require liquid nitrogen tanks, off-site UPS systems and a temperature and vibration-controlled facility. Using the Losant Enterprise IoT Platform and Particle equipment, Dr. Agard built a solution to monitor assets and alert staff if conditions require attention.

The University of California, San Francisco (UCSF) has professional schools in dentistry, medicine, nursing and pharmacy. UCSF leads the nation in biomedical research and has received more funding from the National Institute of Health in 2017 than any other public university.

Dr. David Agard of the University of California, San Francisco (UCSF) needed to identify a solution to help monitor conditions in the university’s electron microscopy lab, which contains two Krios cryo-electron microscopes. Cryo-EM or cryo-electron microscopy allows users to see large biological structures down to the atomic level. Each microscope of this caliber is built to order, requires liquid nitrogen tanks, off-site UPS systems, and a temperature and vibration-controlled facility to operate effectively.

Prior to integrating technology, the university lab staff manually checked temperatures, UPS alarms and switched liquid nitrogen tanks when they were running low. Dr. Agard knew there was a better way. He wanted a fully automated maintenance process and a system that would alert the staff when problems occurred or tanks were low. The team tried a commercial tank switcher first, which failed miserably, according to Dr. Agard.

After a bit of research, Agard used Particle equipment to build sensors. He connected those sensors to a few different IoT platforms but Losant’s capabilities won him over due to the ability to customize dashboards and trigger text and email alerts.  “Being able to see information in real-time has been invaluable.” said Dr. Agard.

Using the Losant IoT enterprise platform, Agard successfully configured a condition-based maintenance solution to monitor and protect the valuable equipment in the lab.

“It was really quite straightforward to set it up.” said Agard. 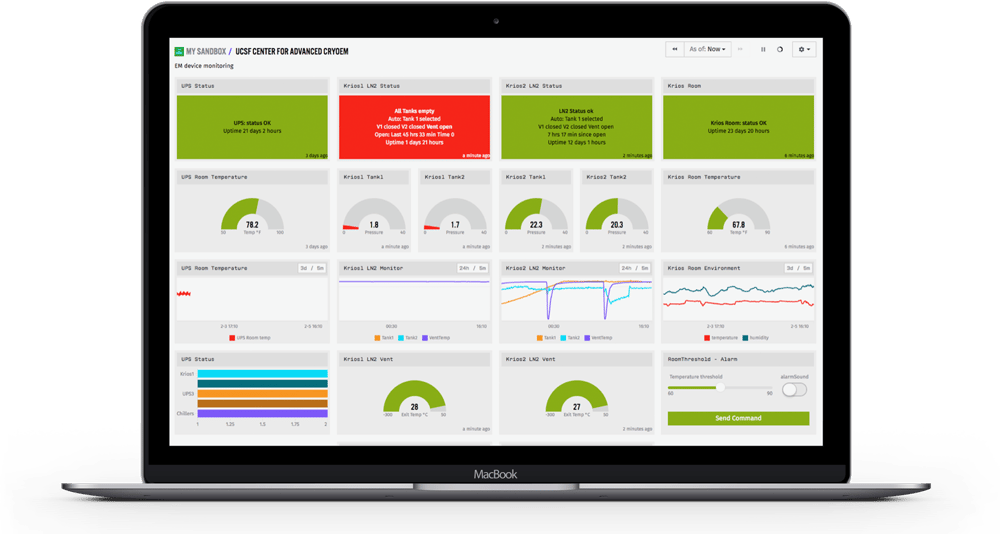 "Being able to monitor things is ideal. The microscopes are about $5 million each and they depend very much on the environment for things to function properly. It allows the managers of the lab to check very easily that all is well"

Today, instead of executing a time-based maintenance solution —which would require staff to change tanks every few days instead of when they were low- the technology constantly checks the condition of the equipment, switches between tanks on site and alerts the staff when nitrogen is too low. In addition to creating an automated process for nitrogen tank switching and replacement to assist the lab’s full-time staff, Agard also created email and text alerts to notify him when the UPS systems have faults or when the facility’s temperature moves into levels not ideal for equipment and samples.

Dr. Agard has installed tablets in the lab to display conditional information for all users to see. He would like to monitor all other laboratory assets using IoT technology.

A PDF version of this case study is available for direct download.

Do More With IoT

Want to understand more about what you can do with the Internet of Things? See our IoT Checklist for Proof of Concept Success.

Get Started With Losant

Schedule a demo with our team to learn more about the Losant Enterprise IoT Platform.