Today’s platform update includes two features that improve workflow performance for users who are doing heavy, real-time data processing within the workflow engine. There are a number of use cases that, prior to this release, fell just outside the capabilities of workflows, and these updates now make those use cases achievable.

While Jupyter Notebooks are still best for batch analytics, they can be overwhelming for those without a programming background. Today’s release empowers such users to take advantage of the drag-and-drop workflow interface to accomplish more of their post-processing outside of a notebook environment.

It is quite common to loop over arrays of data stored on a payload and perform operations on each iteration, and sometimes those operations can be quite time consuming. A poorly constructed workflow, or an excessively large array, can then result in a timeout error, leaving iterations unprocessed.

Today we are exposing the ability to run Loop Nodes in parallel (multiple iterations at one time), whereas previously they could only run serially (one after the other). A parallel loop can run as much as five times faster than a serial loop, drastically reducing the risk of timeouts.

Parallel loops do come with the drawback that the original payload cannot be modified, so we’ve also added the ability to define a result per iteration and return an array of each iteration’s results. Most workflows can easily be adjusted to utilize result-returning parallel loops.

Many users already take advantage of workflow-to-workflow invocation through the Workflow Trigger Node, which allows for spinning off complex calculations to a new process - and avoiding timeout issues. Today’s release extends the functionality of this node to allow for scheduling those invocations at a later time.

A common use case, especially for users taking advantage of our Edge Compute features, is to collect state reports locally on a device and then batch-report all of that state data the next time the device has an Internet connection. If those state reports pile up enough, this can lead to timeouts to third-party API calls or Device State Triggers failing to fire due to concurrency limits. 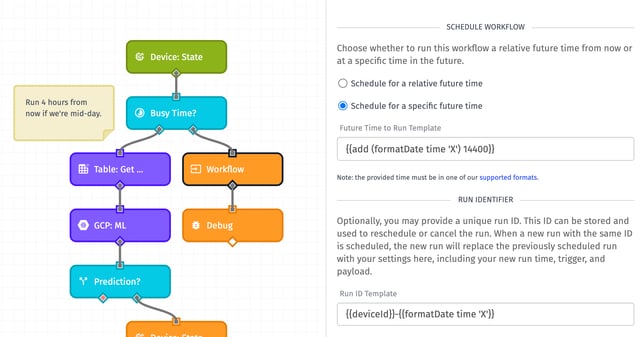 If post-processing of state data can wait, users can spread the executions out over a wider time range, or schedule those workflow runs to occur when they expect lower trigger volume - such as the middle of the night. Also, scheduled runs can later be canceled, or pushed further into the future depending on conditions defined by the user.

With this update, we’re also introducing our Instance Manager APIs: a set of endpoints that help Losant resellers and enterprise customers programmatically manage the organizations under their umbrella. Using these endpoints, instance managers can: