Today’s platform release focuses heavily on our edge compute platform features, with added support for a new protocol, the ability to run edge workflows shipped with your hardware, and additional improvements to the development experience.

Simple Network Management Protocol allows for reading and writing characteristics of devices connected on a local network. The protocol is a popular method for interacting with a variety of hardware: IoT sensors, printers, smart appliances, networking equipment, or servers. While network administrators originally shied away from SNMP due to its security concerns, many are now adopting it as a local communication method for the Internet of Things due to its ubiquity across a wide variety of devices and improved security features in later versions.

With today’s release, the Losant Edge Agent can now act as an SNMP manager, initiating requests to other devices on the network using a suite of new workflow nodes:

The nodes support all three major versions of SNMP, including the far more secure Version 3 (which supports authentication as well as encryption).

As for SNMP traps, it is usually possible to listen for those using a UDP Trigger listening on port 162, which is the default behavior for SNMP-supported devices to publish events.

Adding support for this protocol opens up Losant’s edge compute functionality to a wide new breadth of device types, and we’re excited to see what our users build with these new workflow nodes.

Today’s release also includes the ability to execute edge workflows that are stored on the device’s file system directly, as opposed to requiring a deployment from the cloud platform first.

Before this update, it was impossible to run edge workflows without first connecting to the Losant MQTT broker at least one time to receive a set of workflows to run. With the ability to load workflows from disk, this opens up a number of possibilities; for example …

In our last platform update, we introduced a number of changes to the development lifecycle to streamline the process of building, deploying, and debugging edge workflows. With today’s release, we’ve added a couple additional improvements to close the loop on the process.

First, after deploying a new workflow version, you will be greeted with a modal displaying all the devices that are receiving the new deployment as well as their status (whether the deployment has reached the device yet). From here, you can launch the Live Look modal to immediately debug the workflow on your hardware.

Also, it is now possible to bulk-delete workflow versions from the editor’s Versions tab. This will only delete versions that are not currently deployed or are awaiting deployment. We added this feature because active edge workflow development usually results in a large number of workflow versions being created in a short period of time, which can clutter up a given workflow’s versions very quickly. 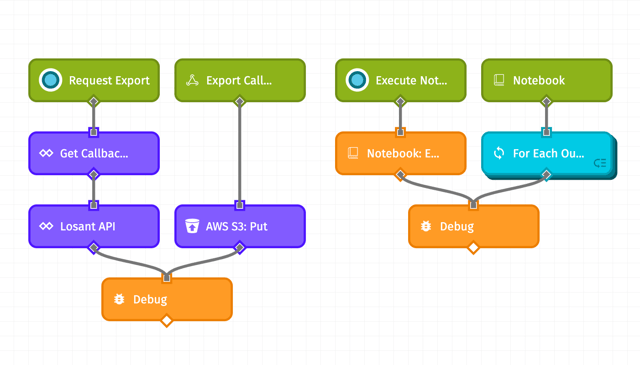 With today’s release, we’ve also added the Stream Exports to AWS S3 template, which demonstrates how to put notebook outputs and data exports directly into an S3 bucket using the product updates described above.