Building an IoT application is no small feat. But, application enablement platforms (AEPs) such as Losant are working to make it as easy as possible. Unlike standard coding, which can be obtuse and difficult to debug, Losant abstracts the complexity of code using its Visual Workflow Engine, which makes the coding process clearer and helps even non-developers understand what is being done. Through nodes that represent preprogrammed functions and a drag-and-drop interface, the Visual Workflow Engine gets your solutions to market quickly.

Let’s dive into the Visual Workflow Engine and see how it can help your business.

What Is the Visual Workflow Engine?

As part of the Losant application enablement platform (AEP), you get access to Losant’s Visual Workflow Engine, perhaps our most defining and immediately recognizable feature. The Visual Workflow Engine is an IoT rules engine that allows you to build business logic by abstracting the complexity of code and turning it into something visual.

Workflows are how you define your business logic in Losant. They are highly customizable, node-based visual tools that enable your developers to manage nearly all aspects of their implementation. Workflows allow you to:

MachNation, in their comparison of Microsoft Azure and Losant, noted about Losant, “Workflows extend to other aspects of the Losant platform in a cogent manner that reduce the overall complexity of even sophisticated IoT deployments.“

“Losant’s node-based visual workflow engine is one of the more user-friendly and sophisticated rules engines on the market today.” 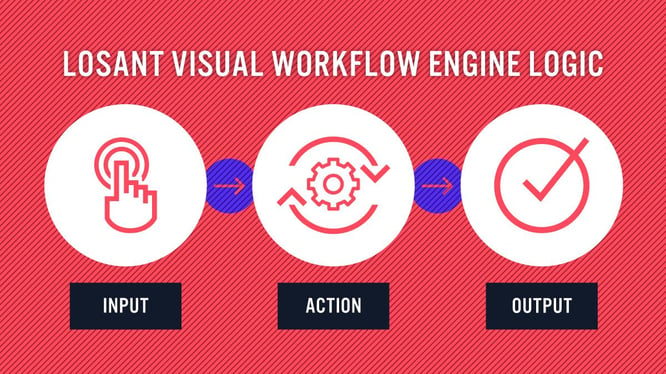 How Does the Visual Workflow Engine Work?

The Visual Workflow Engine operates according to the following logic:

At the core of every workflow is that same logic. Yes, the workflow can expand and get more involved, but the logic of “Input > Action > Output” is always at the basis of the workflow. 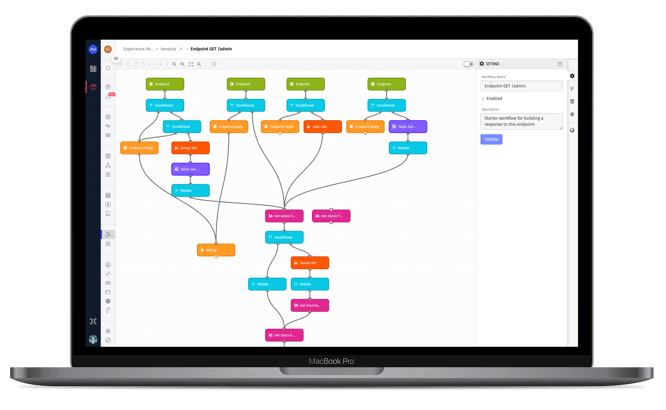 The Visual Workflow Engine is composed of three sections: How Do I Build a Workflow in the Visual Workflow Editor?

The Visual Workflow Engine is a drag-and-drop workflow editor. This means you can drag nodes from the palette onto the canvas and configure them within the property tabs of each node. Once the nodes are on the canvas, you can connect them to create a workflow. Nodes are triggered from the top down, meaning the nodes toward the top of the canvas will trigger before the nodes lower down.

The payload, or the data in the workflow, will move from node to node, following the logic built within your workflow, until the workflow completes. You can follow this logic at any time by clicking the stream button in the top right of the canvas.

What Kinds of Nodes Are There?

There are six node categories in the Visual Workflow Editor, each one indicated by a different color in the workflow palette. The categories are:

How Does the Visual Workflow Engine Lower the Barrier to Entry?

While a coding background is useful when it comes to building workflows in the Visual Workflow Engine, it is not required. The tool includes powerful visualization tools that help anyone build workflows in a few clicks.

Clark Construction Group, LLC, one of the most experienced and respected providers of construction services in the United States, needed visual insight into water delivery and consumption during construction. Undetectable water leaks resulting from environmental conditions and system failures caused millions of dollars in damage for Clark, which leads hundreds of active projects at any given time.

Clark engineers were able to make a workflow to solve this issue, using Losant. Bob Gelety, lead engineer of Clark Construction, had this to say,

“After testing many other products and not having much luck, I was very optimistic when I tried Losant. With no programming background I was still able to get our first job site connected and able to monitor the water main remotely. A big problem has been solved thanks to Losant."

With the Visual Workflow Engine, Gelety was able to get his solution running, without a lot of programming experience.

By taking the concepts used in writing code and making it visual, building workflows and designing programs is easier than ever.

Want to try the Visual Workflow Engine for yourself? Take it for a spin in the Losant Developer Sandbox and learn more about Losant in Losant University.