Understand the Customer, Anticipate Their Needs

Losant believes in six core values that drive everything it does, from how we conduct business to how we design our work environment. One of those values is “Be the Customer,” which means that Losant employees should understand and relate to the customer experience. By doing so, our employees will be able to predict and respond to customers’ needs, often before the customers themselves need it. This is why the company places a strong emphasis on its “dog food” projects.

No, it doesn’t involve Fido’s Kibbles N’Bits. Losant’s dog food projects come from the concept of “eating your own dog food”—that is, Losant employees using Losant’s Enterprise IoT Platform to solve problems. By having all of our employees, not just technical engineers, use Losant and build IoT solutions, all employees can better understand the issues a customer might face during their development. In other words, the employees can “be the customer.”

Employees can work on dog food projects during company time, and receive funding to purchase the hardware they need. They are given a whole quarter to work on the projects, and then present their projects to the entire company at the end of the quarter.

"We’ve always thought of dog food projects as a key component to understanding what our customers go through in building a solution.”

Emily Lutz, Losant’s HR Generalist, wanted a way to know when her dog’s water bowl was empty. Such a task often required a physical check, which, depending on the location of the bowl, can be a challenge. Fortunately, she was able to develop a solution in Losant.

To build her solution, Emily used a moisture sensor with NodeMCU to read the level of water in her dog’s bowl. That information was relayed to Losant using an Arduino IDE. Emily found the biggest challenge to be the technical aspects, both hardware and software. She relied on her fellow coworkers and the Losant documentation to build her solution. 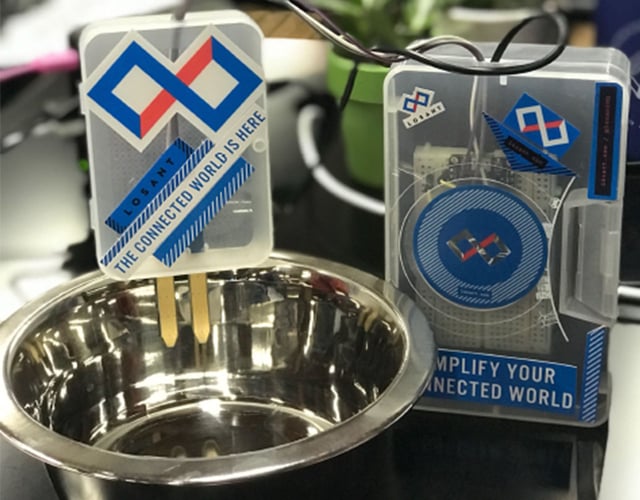 She was surprised that she could see, in real time, that her workflow was working. Using the Visual Workflow Engine, Emily was able to track the payload, that is, the data in her application, as it moved through her workflow. This allowed her to see the data and troubleshoot, even though she didn’t know much about programming.

Emily enjoyed assembling her product and developing her workflow. She did it in such a way that the text alerts she would receive could be sent to multiple people, allowing her kids to help refill the bowl. This allowed her to really understand Losant and better relate to customers.

Keep Cigars Ready When You Are

Craig Baldwin, Partnerships Director, has a large number of rare cigars that he wanted to keep fresh. If cigars are not stored in the proper humidity range, the tobacco leaves in the cigars will expand or contract and the cigar will become unsmokeable. Normally, monitoring this requires a humidor, or a storage container designed to maintain a particular humidity level, a hydrometer to monitor the moisture levels, and then Boveda packets, adjusted manually, to keep the cigars at the correct moisture level. This is time-consuming and challenging, since the readings for the hydrometer need to be read and the moisture levels adjusted by hand.

Craig’s solution was to use Losant to monitor the humidity levels of the cigars. He used Particle hardware and, with a webhook developed in Losant’s Visual Workflow Engine, had his solution up and running. He used an Amazon API and configured Losant to automatically order replacement packets whenever the moisture level dropped below a certain range. He built a dashboard to display the findings of his sensor. This resulted in considerable savings for Craig, who no longer had to worry about his cigars drying out.

Craig was able to build this solution quickly and easily with Losant. He found the process to be surprisingly easier than he expected, and he was able to get up and running in little time at all.

John Scheels, Head of Business Development, wanted a way to keep mice out of his RV when it’s stored during the winter. Usually, this involved lethal mousetraps that have to be periodically checked to see if they captured a mouse. John decided, instead, to use IoT to build a humane mousetrap that, when it captured a mouse, would send an alert to his phone informing him of the capture. That way, he only needed to check the RV when a mouse was caught, and he could release the mouse back into the wild. 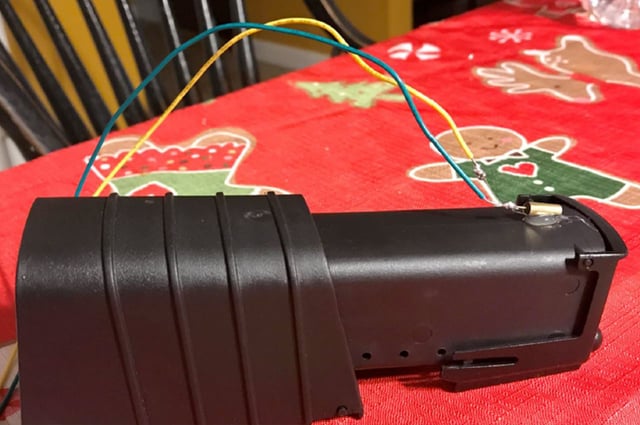 John designed his own mousetrap that, along with a Particle device, could send information to Losant. A humane mousetrap works by tilting backward when a mouse enters, with doors that fall into place to seal the mouse inside. John was able to configure the Particle device to know when the mousetrap rocked backward and send an alert to his phone. He did this through the Visual Workflow Engine and Losant dashboards.

John faced challenges primarily in coding the device to send an alert. But, he found Losant’s Visual Workflow Engine to be a very helpful tool in designing his application. He didn’t know a coding language but found that Losant’s documentation was a big help. He used the Weather Station walkthrough to understand how the Visual Workflow Engine worked and applied what he learned from that to his own application. 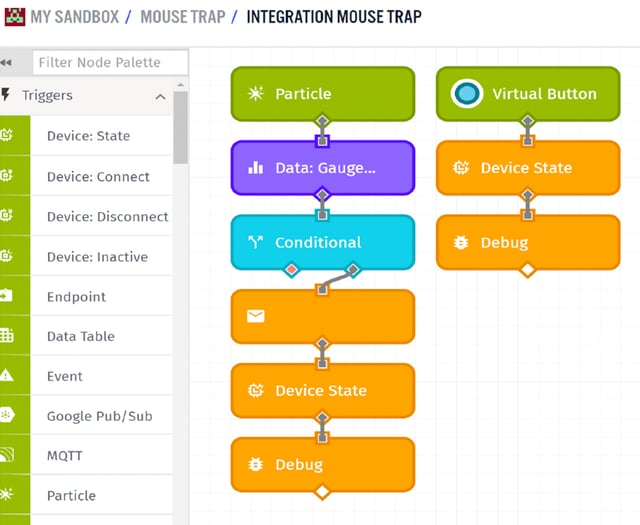 Another challenge he faced was battery life. If he had to replace the batteries multiple times, that would defeat the purpose of his mousetrap. So, he had to test and see how many messages per day he wanted the device to send to both be effective and to keep the battery running.

The project ended up being a complete success and John was able to use it to keep his RV free of mice. John felt better able to relate to the customers now because, while the scale of his solution was smaller, the pain points he felt would likely be the same as the ones the customers felt. This allowed him to “be the customer” and gain an understanding of what the customers would be looking for.

Prevent Mold from Building Up

Janet Simon, Director of Marketing, wanted to monitor the humidity levels in her home to reduce the chance of mold building up. To do this, Janet used a mcThings Gateway 110, three mcModule 120 devices with battery clip, three batteries, and three Adafruit humidity sensors. These parts did not work together right out of the box, so she had to solder them, connect the wires in a way that made sense, and ultimately connect the devices to her Losant application. 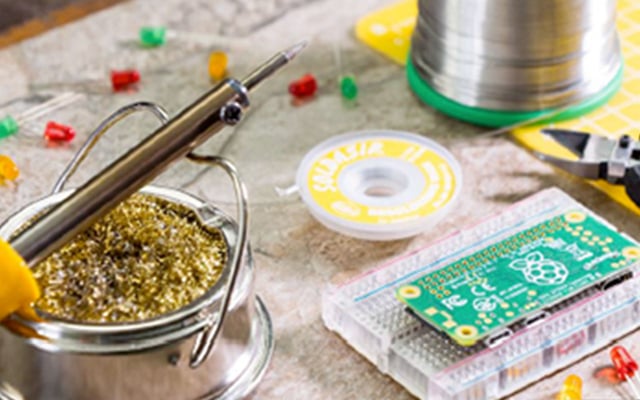 During her project, Janet came to appreciate how thorough Losant’s documentation was. She also found the Visual Workflow Engine to be a big help to her coding, allowing her to think of her program in a visual manner and not be held back by complex syntax. But, most importantly, she learned the value of good hardware and installing it in the right place. Janet had to move the sensors a few times to find the best location for them, since a skylight caused her to get incorrect readings. Turns out, no project is just “set it and forget it.” Projects have to be adjusted on the fly to ensure you get the most value from them.

Turn the Lights On and Off

Taron Foxworth, Education Lead, wanted a way for the lights in his apartment to turn on when he entered the room and turn off as he left. To do this, Taron installed five puck.js Bluetooth beacons around his apartment that detect the proximity of the Bluetooth sensor on his phone. These sensors sent the data to a Raspberry Pi, which then sent the data to Losant. When Taron’s phone comes within a specified proximity to a sensor, the lights turn on. And similarly, when his phone moves away, the lights turn off.

Despite being the Education Lead, Taron still ran into challenges when developing his dog food project. The biggest one was Bluetooth Low Energy (BLE). Bluetooth has a large number of different standards and finding the one that worked the best for his solution proved to be a challenge. Combined with the complexities inherent in Bluetooth itself, Taron struggled to get every piece to come together.

But, once everything was configured, and data could be sent to Losant, Taron was able to monitor the status and battery life of the Bluetooth sensors in a Losant application. He could even manually turn the lights on and off.

Eat Your Own Dog Food

Losant employees, no matter what team they are on, use their dog food projects to not only better understand the Losant platform but also to experience the platform from a client’s perspective. This provides valuable insight and understanding of what features help clients build reliable IoT solutions. Also, it helps us determine how we can improve the client experience going forward.

“Dog food projects are a simpler view of what a real application is going to be.”

Interested in trying Losant for yourself? Inspired by the dog food projects you’ve just read about? Try Losant for free right now with the Losant Developer Sandbox.