Losant With IFTTT and Google Sheets

With the Builder Kits beginning to ship to folks, we thought it would be cool to move beyond the basic workshops and show you some other things you can do with Losant and the simple hardware in the kit.  Today we're going to look at connecting Losant to IFTTT, a well-known website for connecting various apps and services together.  The possibilities are quite possibly endless when connecting platforms like IFTTT and Losant, but we're going to keep our focus pretty narrow and just show off one idea: taking data out of Losant and placing it into a Google Spreadsheet.

Before we move on, though, I would recommend that you read up on the Builder Kit Workshops, if you haven't already.  I'm going to go ahead and assume that you've completed Workshop 3 and have a functional board with a button and temperature sensor reporting to Losant. Just plug it in and let it start reporting, because we aren't going to need to change anything about the breadboard layout or software on the Feather for the rest of this post.  Everything that we need to do will be done in Losant (and IFTTT).

So we have the temperature sensor reporting to Losant every 15 seconds.  Our goal for this post is to keep track of a moving average of that temperature date, and when we press the button on the kit, for that moving average to be added as a new row in a Google Spreadsheet.  That means our first step needs to be to build a workflow for tracking a moving average.  Below is a picture of the example workflow that I built – we'll go through each node step by step:

Ok, so now we have Losant calculating a moving average of temperature data!  What's next?  First we have to configure the IFTTT portion of this setup – so hop on over to https://ifttt.com and either log in or create an account.  We're going to need to create a custom recipe that uses the "Maker" channel as the trigger and the "Google Drive" channel as the action.

First step to configuring a IFTTT recipe is choosing the "This" (or the "Trigger") and configuring it.  The trigger in this case is the Maker Channel, which allows IFTTT to respond to arbitrary webhooks.  This is going to be how Losant ends up talking to IFTTT.

The only configurable part of a "Maker" channel trigger is the event name, which in this case I named buttonPressed.  That event name will be relevant when we have Losant talking to IFTTT – this is how IFTTT will know to trigger this particular recipe. 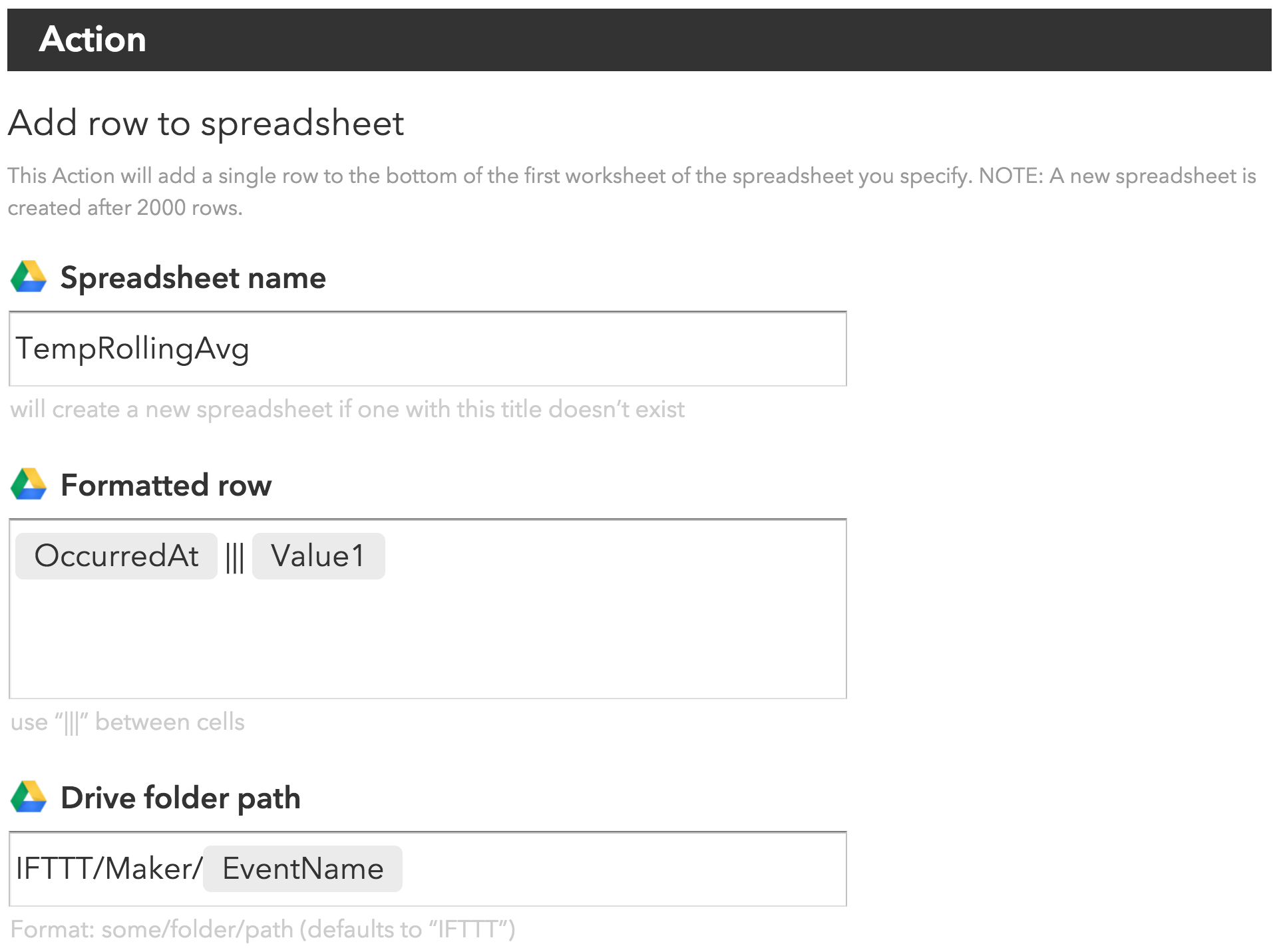 You can name your spreadsheet whatever you would like.  I named mine TempRollingAvg.  You can also place the spreadsheet wherever you would like – I left mine at the default path IFTTT suggested.  The important bit, though, is the row formatting.  This configuration has the action adding a row with two cells. The first cell (OccurredAt) will be filled in with a date: the date that the IFTTT trigger fired.  The second cell (Value1) will be the the value for the moving average of the temperature.  The IFTTT Maker trigger has very specific naming conventions, which is where these field names come from.

Ok, so our recipe is configured, and now we need Losant to actually trigger this recipe.  How do we do that?  Well, first you'll need to look at the details of your Maker Channel (click the "How To Trigger Events" link on that page): 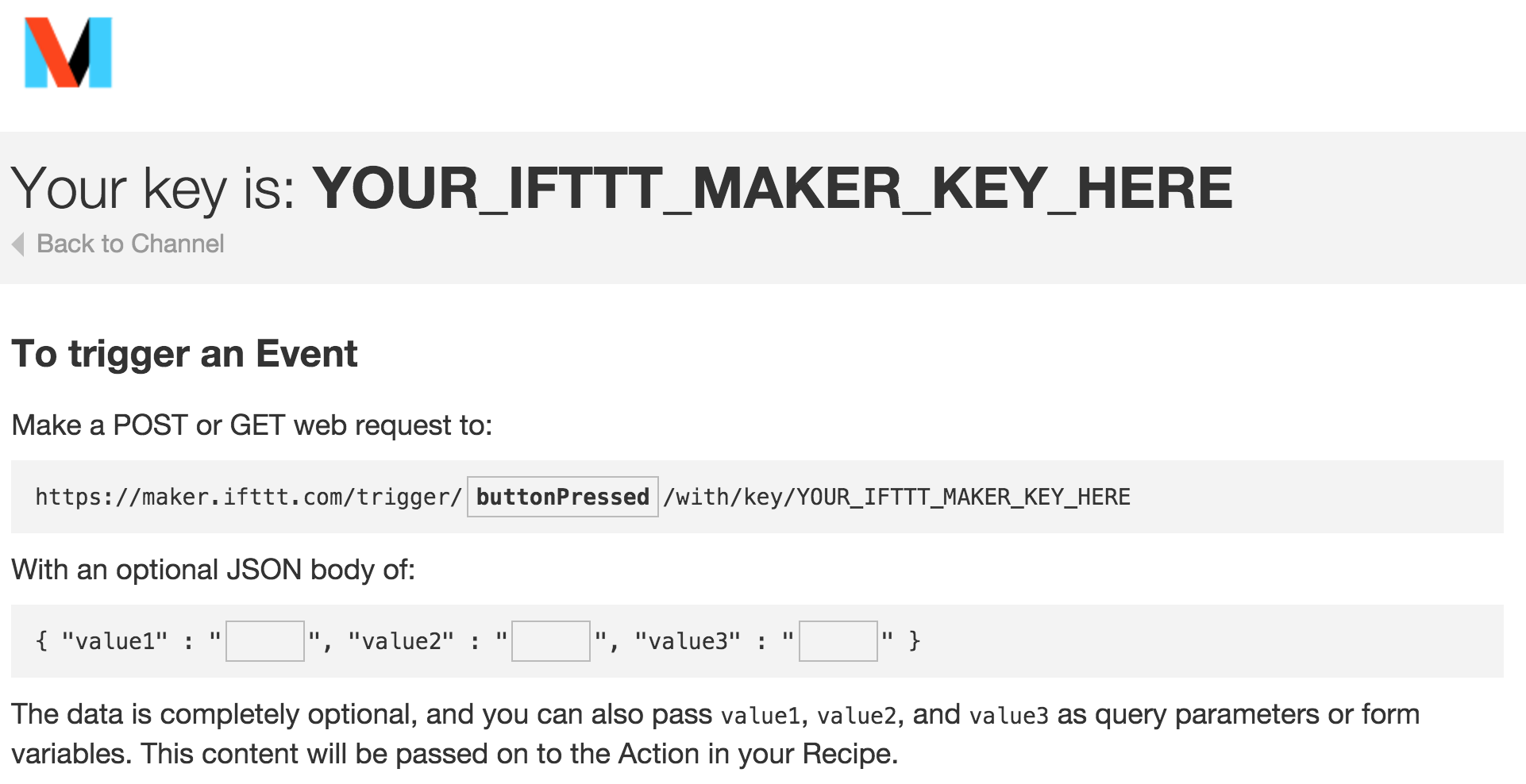 You will see a page similar to the above screen shot, but where mine says YOUR_IFTTT_MAKER_KEY_HERE, yours will actually have a key.  You care about the url – and make sure to fill in the event name with the name you gave your event (in my case buttonPressed).  This is the url that we're going to have our Losant Workflow POST to with the moving average of the temperature.

Now it's time to go back to our workflow and add a few new nodes!  Below is what our newly modified workflow looks like, and like I did above, I'll walk through the two new nodes. 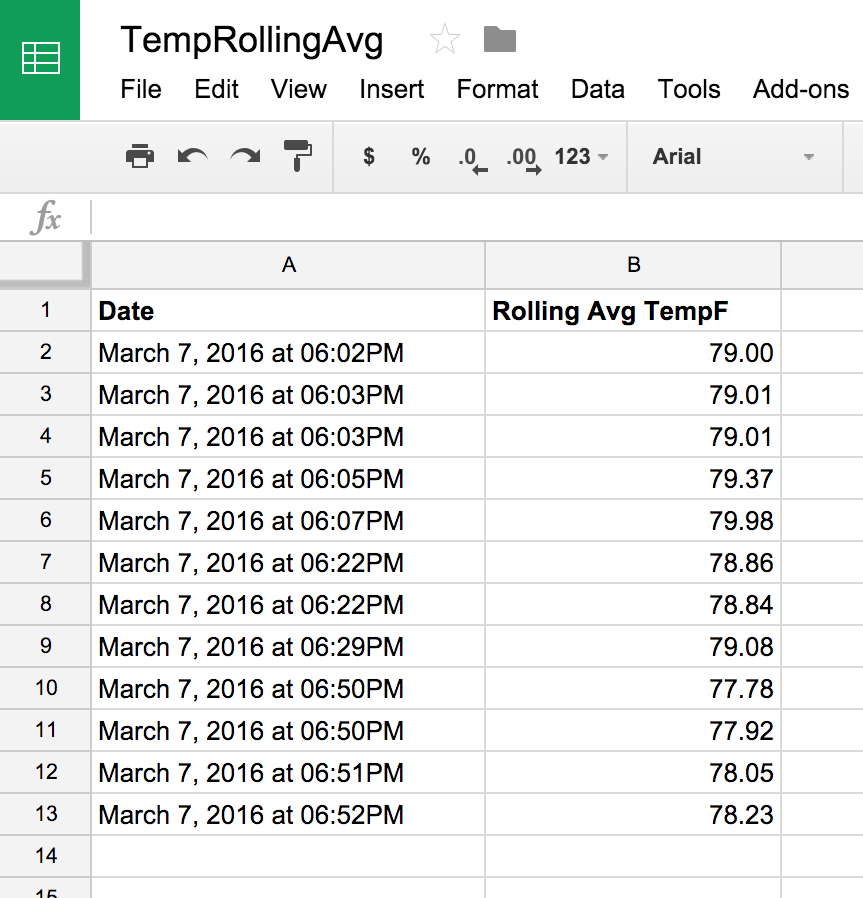 Every time I press the button, a new row appears in the spreadsheet!  It's just a shade warm around here today for my tastes, but since it's been pretty cold lately, I guess that's ok.  Hope this sampling of more complex Losant workflows and interactions has been interesting, and if anyone takes these ideas and runs with them to make something, please let us know!  We love to hear how people are using Losant to do their own things.