Getting Started with PlatformIO IDE and Losant

Anybody who has ever worked with the Arduino Integrated Development Environment (IDE) can tell you that the tool is clunky at best and maddening at worst. PlatformIO's IDE takes the pain out of programming for microcontrollers at every step: initial setup, application developmentm, build, deployment and testing.

We previously wrote about getting started with PlatformIO, but now that Losant's Arduino MQTT Client is available in the PlatformIO Library Registry, we can dramatically simplify the steps required to begin working with the Losant platform. In this post, we'll outline the key benefits of working with PlatformIO's IDE and how we can utilize the tool in Losant's door sensor kit project.

Want to build something awesome? If you're just starting out with the Internet of Things, pick up one of our ready-to-go kits in the Losant store.

In addition to all of the features found in the Arduino IDE – such as build / deployment tools and a serial monitor – PlatformIO includes a number of improvements on the development environment: 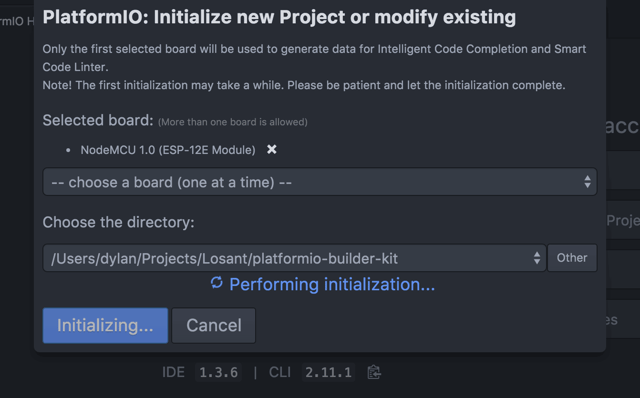 By using PlatformIO, we can replace our existing environment setup instructions with these simple steps below. 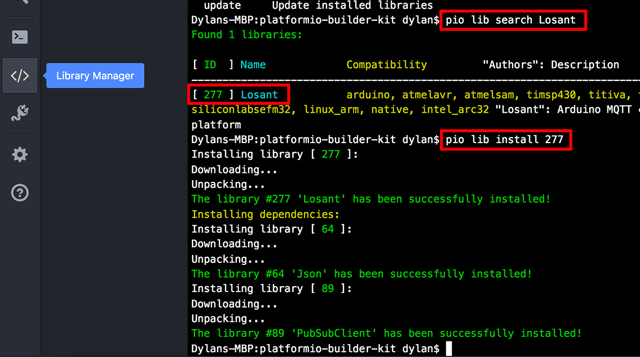 The search command (first red box) helps us find our package by ID (second red box) which can then be installed in our environment (third red box). Note how Losant's two dependencies automatically install as well.

Now you're ready to set up your Losant account, edit the application code to include your personal settings and wire up your kit.

After those steps are complete, it's time to build and upload your project from the IDE. Follow the instructions provided in the PlatformIO instructions to get your code onto the microcontroller.

Now that we've dramatically simplified environment setup using the PlatformIO IDE, we can easily maintain a number of different IoT projects for a whole array of devices. And as the IoT development community grows and PlatformIO's popularity increases, we can expect dependency management to become even easier as popular libraries make their way into the PlatformIO Library Registry. Expect future Losant tutorials and documentation to adopt PlatformIO's IDE as the editor of record.