Tech trends come and go — that has been the reality since the dawn of the digital era. But one trend that has gotten the tech world abuzz with excitement and anticipation is the Internet of Things (IoT) — a concept that could spell the beginning of a new era in digital and wireless connectivity.

Though there is no hard and fast definition for IoT, Techopedia defines it as "a computing concept that describes a future where everyday physical objects will be connected to the Internet and be able to identify themselves to other devices." That means laptops, smartphones, and tablets will no longer be the only devices that will allow people to access the Internet. With IoT, even a door, refrigerator, and washing machine can have Bluetooth or WiFi, allowing it to connect not just to the Internet but to one another. In the IoT world, everything is "smart."

How Does IoT Work?

IoT relies on one crucial factor in making connected devices responsive to one another, and that is through sensors. These sensors register changes in temperature, pressure, motion, sound, and light. IoT works because of the presence of small sensors that measure, evaluate, and gather data. Once these events are gathered, cloud-based applications are tapped to interpret and transmit the information sent by the sensors. Since the information is not saved in a physical space but rather in the cloud, users can access these data through apps anytime and anywhere.

To illustrate how IoT works, take a smart car for example. Unlike ordinary cars, smart cars can have access to other devices and apps, like the owner's calendar and map apps, for instance. When the owner gets stuck in traffic, the car will automatically detect this and look for alternative ways to avoid traffic. It can also send a text message to the other party, informing that his owner will be late to the meeting. Everything is automated, and the car owner does not even have to lift a finger. The bottom line is this: As long as a device has a sensor, it can be connected.

"The new rule for the future is going to be, anything that can be connected, will be connected."

What Are IoT’s Applications?

According to Kevin Ashton, the person widely credited for coining the concept of IoT, "If we had computers that knew everything that was to know about things — using data they gathered without any help from us — we would be able to track and count everything, and greatly reduce waste, loss, and cost. We would know when things needed replacing, repairing, or recalling, or whether they were fresh or past their best." A lot of big companies are working on developing their own connected devices.

These include Apple, Google, Samsung, LG, and Philips, just to name a few. Even smaller companies and startups are dipping their hands in the IoT pool, and research firm Gartner predicts that more than 4.9 billion connected devices will be used in 2015 alone. By 2020, the number will reach 25 billion. 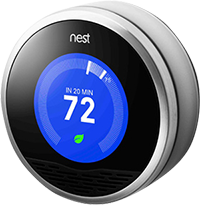 One well-known example of an IoT device being used today is the Nest thermostat owned by Google. Connected through Wi-Fi, the Nest thermostat enables the user to remotely adjust the house's temperature using a mobile app. But what makes it really intelligent is that it can learn the user's behavioral patterns to automatically create a temperature-setting schedule, without the need for the user to customize it himself.

At present, companies are focusing on creating smart home platforms. There are smart smoke detectors from Netatmo, smart homes from Samsung, and smart beds from Sleep Number mattresses. With the rate that technology is going, it won't be long before the Industrial Internet of Things or IIoT emerges—a future where all seamlessly integrated devices will present a new market opportunity that can fundamentally transform and disrupt a wide range of conventional industries. For now, all the world can do is watch and wait...